Misfits and rejects - the hidden blessing of being picked last

When I was a kid I was never a priority for the team picking. It's not that I wasn't able, despite the knee braces and nonsense, it was more that I didn't really care for it. My family don't "support a team", or play much sport. My brother played cricket, as a small child I found it intensely boring. My father sailed. My mum watches Wimbledon while knitting. I never really understood the appeal of watching someone else do sport, and none of the sports that were available to me interested me.

You want the ball so badly? Have it! Why are you throwing it away? I thought you wanted it?

I am not a sporty person.

So it came to pass that I reached an age where my peers were getting into their competitive sports, with school teams and suchlike. But I wasn't on the teams. Not even the 3rd reserve team. I didn't mind because it just wasn't my bag.

Those of us who didn't make the teams often referred to ourselves as "the rejects" (officially "non-match", one of the staff called us "salon de refuse", which is nice). We would have our own sports sessions, because the school was obliged to exercise even those of us who weren't contributing to the glory of the school name.

Had it not been framed as such a booby prize though, it would have been a pretty brilliant session. While our more talented peers were out chasing a ball around a muddy field, we got to try all sorts of other things. I did squash, badminton, dodgeball, step aerobics, silly fitness games, or just sports with no pressure and no technique drills. I was actually quite into it.

I recall one afternoon our teacher had merged us with a group of boys in a similar "freeform sports" situation, and we had a huge basketball match. One of my friends, who had finished her match early, came by and watched. Afterwards she expressed surprise that I was "really good". Which she had a right to, because on the netball court I was about as much use as a wet piece of tissue paper.

But that was the key, I was quite good, when I was enjoying myself and not being pushed to perform in a competitive sport.

There are a few things I could take away from this experience.

First is my eternal bugbear where children who are exposed to a fairly limited spectrum of physical activity "learn" that they are not suited to being active simply because it doesn't happen to be a good fit for them. Many of those children grow up to be inactive adults, because they are "not sporty".

I feel immensely privileged that while I still had this millstone upon my self esteem, I also had parents who took me hiking and to swimming lessons, my father took me to the gym with him, sowing the seeds for later in my life when I needed to find a way to fitness that worked for me. I also got to ride horses and then when I got to university I discovered martial arts, then dance. I found the activities that I loved and wanted to do, every day.

Here's my second takeaway. If I had been on the teams, I don't think I would be as active as I am today. I learned, albeit in a pretty crummy environment, to have fun being active in all kinds of ways. To try new stuff without the pressure of having to be "good" at it. I'm still doing that at 37 years old with things like powerlifting and strongman. If I had spent that time perfecting my skills in a specific sport, I would probably have given up in adulthood when I reached the limit of my talent or the proximity of a team.

So I'm not a sporty person, but that's OK, because I have found ways to move my body, to feel good and stay healthy, which I enjoy. And I get to help other people like me do the same. There's no trophy can beat that. 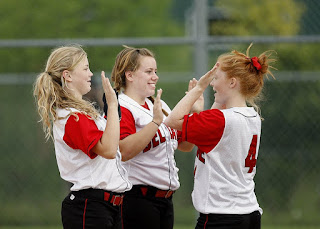 I believe that every individual has the right to access health and fitness as an enjoyable part of a life well lived. I help people do this through my online and in-person personal training services.

Popular posts from this blog

September 26, 2017
I've written before about living with EDS and Fibromyalgia ,  much of my personal fitness and health practices are geared around managing those conditions and keeping me as well as I can be. When managing a chronic health condition, particularly one that involves fatigue and potential flare ups, pacing, good nutrition, good sleep and generally taking care of yourself is always the first priority. Ideally we want to have as few flares as possible. But sometimes they still happen, and when they do, it's good to have a strategy in place. And I'm going to be talking in fairly general terms, because while EDS and Fibro are my personal experience, there is so little understanding of the mechanisms behind these conditions, that most strategies are going to be applicable to a number of conditions where crashes of exhaustion and pain are a feature. So what is a flare? A flare is a period where someone with chronic illness suffers increased symptoms for a short while. The
3 comments
Read more

Wellbeing is not a competition

January 07, 2017
I want to have an in depth look at another aspect of the Free Living Fitness manifesto .  Wellbeing is not a competition. Sports are competitive by their nature, some fitness activities like body building are also competitive, but taking care of your body should not be, that's between you and your body. Often when I am in the gym, I see people lifting weights with bad form. They lift the weight, then drop it, not completing a full cycle of the rep. Or they lift too fast to properly get the benefit of using the whole muscle. Or they use form that reduces the isolation, for instance using more of their back than necessary in a shoulder exercise. All of these things achieve one "false" result: They allow you to lift a heavier weight.  Why lift in a way that reduces the efficacy of the exercise, gets you slower gains and potentially hurts you? Because the number on the weight is bigger, and being able to quote a big number puts you ahead in the gym competitio
1 comment
Read more

My top apps for supporting a healthy lifestyle.

December 27, 2016
The hardest part of making healthy choices and lifestyle changes is making it a habit. It's easy to make a decision to "eat better", "exercise more" or whatever your current plan is. It's a lot harder to stick to it on the rough days, for long enough that it becomes a habit and part of your life that you can't imagine being without. I love a bit of tech. I am a super geeky science nerd and finding ways to use technology to support my health and fitness makes me very happy. So with this in mind I thought I'd give a quick run down of my favourite smartphone apps for developing and maintaining healthy habits. Habitica I'm starting with this one because it's mad and I love it. Habitica is basically a to-do list app, but it's specially for the gamers among us. If you are familiar with Dungeons and Dragons, and all the games that grew out of that system and fantasy world, you will recognise Habitica. The app allows you to create 3 t
Post a Comment
Read more

Step away from the scale. Why weigh ins and weight loss don't match.

April 29, 2017
I have a persistant bugbear when it comes to health coaching, and it's this issue of "weight". People are often talking about "losing weight", the number on the scale becomes a focus. "If only I could just get under 65kg" they say. Or worse I see advertised "buy this supplement and you can lose 20kg in a fortnight". I've found myself frequently sitting with a weight-focussed client and asking "if you were 2 dress sizes smaller, fit and toned, but you weighed the same as you do now, could you be happy with that?" You might be surprised how challenging a question that can be. For many people, particularly those who have struggled with weight loss, that number is the absolute key. They can wake up, feeling energised and full of life, slip into those jeans that used to live hopefully in the bottom of the drawer, check themselves in the mirror and love what they see... then they step on the scales, see the number is half a kilo
5 comments
Read more

Confused about your online fitness options? I'm here to help!

April 06, 2020
Isolation fitness is the new gym (for now) With Covid-19 measures limiting our movement at access to fitness, the internet has become a chaotic explosion of workout options. All the online retailers are sold out of home fitness equipment (ask me about my quest to find a pair of 20kg olympic plates...) and there is a definite shift in consciousness - I have never seen so many people talking about their exercise - and I surround myself with fitness people! In a way it is heartening to see a universal shift where people are becoming very aware of their health. It's necessary when, in all likelihood, many of us will have to fight a respiratory virus - the healthier you are to start with, the better your chance of a full recovery. Doctors have suggested we should prepare ourselves as we would for surgery. As a fitness professional it is always in my mind that I am "the front line of preventative medicine". Fitness, nutrition , recovery and a balanced mindset make measu
Post a Comment
Read more