July 26, 2017
Carrying on with adventures in powerlifting.

Once I decided that it might be fun to try competing in powerlifting competition, I was presented with my greatest challenge yet - working out how to go about that.

Powerlifting is a fairly niche sport, there's lots of really keen athletes and lots of resources out there (thank you internets), but they tend to be polarised between the fairly superficial, which helped me decided that it was something I wanted to pursue, but didn't tell me how, and the completely specialist, that assumes you are already in and know what's going on.

I did a bit of a Google and found a competition fairly close to home, almost exactly at the point where I will peak my current training cycle. Brilliant. But it's not that simple....

All powerlifting competitions happen under the auspices of a federation, and to enter a competition, you have to be a member of that federation. Some competitions also require you to qualify, which means as a beginner you need to start in an open competition, to get some official lift numbers down.

Different federations have different rules and sometimes different classes of competition under their umbrella.


So I decided to have a word with someone who knows stuff - the owner of the gym I train at is a competitive powerlifter. His first advice was to decide which federation I wanted to compete in. This isn't a lifelong commitment, like choosing your team in Pokemon Go, you can change federations from year to year or even subscribe to more than one.

From our conversation I learned that there are effectively 3 major criteria which I had to consider.

The first is the social aspect. Some federations are known to be "friendlier" than others, also, if you already know someone who is competing in a particular federation, then joining the same one means it's easy to support each other and attend events together.

Weight classes also vary between federations, and that might be something to consider.

There's also the kind of competition. Equipped competitions allow supportive suits, knee wraps, all kinds of kit to stabilise the body and get more out of the lift. Raw competitions allow less or no equipment (most allow belts and knee sleeves, but it varies). Classic allows some basic supports, but no suits.

For a laugh you should watch this video of Meg - usually a raw lifter, trying to get into a squat suit (from about 8 minutes). Equipped lifting takes dedication.

The last thing to consider is the availability of competitions. It's all very well finding a lovely federation with rules that suit your needs, but no good if they don't have any competitions you can get to!

My final decision was to join British Powerlifting, because they are the ones hosting an open meet, just an hour's drive for me, at a convenient point in my current training schedule. I'm also going to go to watch the nationals with the British Powerlifting Union and see what they are about.

Even for raw competition, a certain amount of equipment is necessary. I'm considering this after choosing a federation because the rules for kit requirements vary between federations. British Powerlifting operates under IPF rules, which are fairly strict. As well as specifying the technical requirements for all the kit (right down to the appropriate stretchiness of your singlet and the length of your t shirt sleeves) they have a very specific list of makes and models for equipment that are considered legal in competition. Local level meets are reportedly less strict about kit requirements, but that's up to the organiser and it's probably not good economics to buy an unapproved lifting belt because one competition will allow it, and then find the next won't accept it.

For a classic meet, my equipment list goes like this:
And that's a lot of stuff for an "unequipped" competition :D

I also learned that knee sleeves are a workout in themselves.

Well, it's taken over a week, but I have finally got these knee sleeves on. #powerlifting #massivecalves #toomuchhench #xxs #dontyoudarepointoutineisbackwards #nevertakingitoff
A post shared by Claire Salem (@firelotusfitness) on Jul 16, 2017 at 8:35am PDT


Finding the community, and the information


Honestly, I don't know how anyone did this before the internet. I'm going to quickly summarise the sources of information that have been super useful for me.

There's a few really useful places on YouTube for info. Juggernaut Training have a channel that includes a lot of really useful videos, including one that takes you step by step through what to expect on your first meet day and some really in depth coaching videos. Megsquats produces some fun vlog style content. Generally videos with people like Alan Thrall and Silent Mike are good for geekery.

All the federations have their own Facebook pages, some also have community groups where you can chat and ask. There's also a good Powerlifting Women community on Facebook (if you are a woman) and this Instagram is fun to follow (even if you aren't a woman).

It's taken a bit of digging, but I'm really excited to be discovering not only the sport, but a whole bunch of really awesome people. 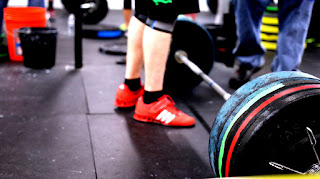 Popular posts from this blog

September 26, 2017
I've written before about living with EDS and Fibromyalgia ,  much of my personal fitness and health practices are geared around managing those conditions and keeping me as well as I can be. When managing a chronic health condition, particularly one that involves fatigue and potential flare ups, pacing, good nutrition, good sleep and generally taking care of yourself is always the first priority. Ideally we want to have as few flares as possible. But sometimes they still happen, and when they do, it's good to have a strategy in place. And I'm going to be talking in fairly general terms, because while EDS and Fibro are my personal experience, there is so little understanding of the mechanisms behind these conditions, that most strategies are going to be applicable to a number of conditions where crashes of exhaustion and pain are a feature. So what is a flare? A flare is a period where someone with chronic illness suffers increased symptoms for a short while. The
3 comments
Read more

Wellbeing is not a competition

January 07, 2017
I want to have an in depth look at another aspect of the Free Living Fitness manifesto .  Wellbeing is not a competition. Sports are competitive by their nature, some fitness activities like body building are also competitive, but taking care of your body should not be, that's between you and your body. Often when I am in the gym, I see people lifting weights with bad form. They lift the weight, then drop it, not completing a full cycle of the rep. Or they lift too fast to properly get the benefit of using the whole muscle. Or they use form that reduces the isolation, for instance using more of their back than necessary in a shoulder exercise. All of these things achieve one "false" result: They allow you to lift a heavier weight.  Why lift in a way that reduces the efficacy of the exercise, gets you slower gains and potentially hurts you? Because the number on the weight is bigger, and being able to quote a big number puts you ahead in the gym competitio
1 comment
Read more

My top apps for supporting a healthy lifestyle.

December 27, 2016
The hardest part of making healthy choices and lifestyle changes is making it a habit. It's easy to make a decision to "eat better", "exercise more" or whatever your current plan is. It's a lot harder to stick to it on the rough days, for long enough that it becomes a habit and part of your life that you can't imagine being without. I love a bit of tech. I am a super geeky science nerd and finding ways to use technology to support my health and fitness makes me very happy. So with this in mind I thought I'd give a quick run down of my favourite smartphone apps for developing and maintaining healthy habits. Habitica I'm starting with this one because it's mad and I love it. Habitica is basically a to-do list app, but it's specially for the gamers among us. If you are familiar with Dungeons and Dragons, and all the games that grew out of that system and fantasy world, you will recognise Habitica. The app allows you to create 3 t
Post a Comment
Read more

Step away from the scale. Why weigh ins and weight loss don't match.

April 29, 2017
I have a persistant bugbear when it comes to health coaching, and it's this issue of "weight". People are often talking about "losing weight", the number on the scale becomes a focus. "If only I could just get under 65kg" they say. Or worse I see advertised "buy this supplement and you can lose 20kg in a fortnight". I've found myself frequently sitting with a weight-focussed client and asking "if you were 2 dress sizes smaller, fit and toned, but you weighed the same as you do now, could you be happy with that?" You might be surprised how challenging a question that can be. For many people, particularly those who have struggled with weight loss, that number is the absolute key. They can wake up, feeling energised and full of life, slip into those jeans that used to live hopefully in the bottom of the drawer, check themselves in the mirror and love what they see... then they step on the scales, see the number is half a kilo
5 comments
Read more

Confused about your online fitness options? I'm here to help!

April 06, 2020
Isolation fitness is the new gym (for now) With Covid-19 measures limiting our movement at access to fitness, the internet has become a chaotic explosion of workout options. All the online retailers are sold out of home fitness equipment (ask me about my quest to find a pair of 20kg olympic plates...) and there is a definite shift in consciousness - I have never seen so many people talking about their exercise - and I surround myself with fitness people! In a way it is heartening to see a universal shift where people are becoming very aware of their health. It's necessary when, in all likelihood, many of us will have to fight a respiratory virus - the healthier you are to start with, the better your chance of a full recovery. Doctors have suggested we should prepare ourselves as we would for surgery. As a fitness professional it is always in my mind that I am "the front line of preventative medicine". Fitness, nutrition , recovery and a balanced mindset make measu
Post a Comment
Read more